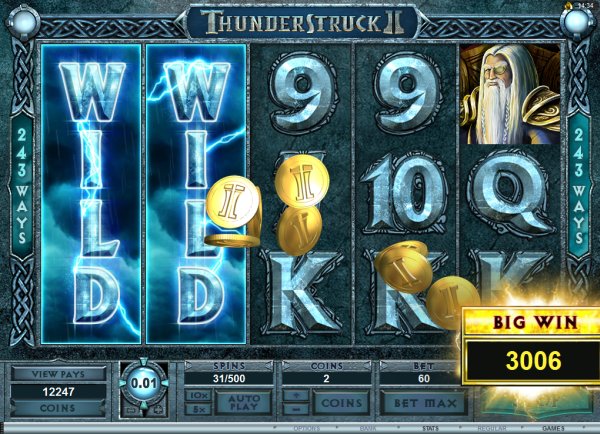 Thunderstruck II is the successor of Thunderstruck, a very popular slot game. This version is very nice and popular today in the online casinos. Compared to Thunderstruck the sounds and graphics are a lot better and more enjoyable.

The game features five reels with a crazy amount of 243 winning ways. There are various Nordic gods featured on the reels, including Loki, Valkyrie, Odin and Thor. Other symbols are Thor’s hammer which is a bonus symbol, the Thunderstruck II logo which can substitute all the other symbols on the reels except Thor’s Hammer, the Ship, and Thor’s home. The generic poker characters 9, 10, J, Q, K and A appear on the reels as well.

The Wildstorm feature is triggered randomly and can bring 1 free spin and big wins if 4 or more reels turn wild.

The main feature of Thunderstruck II is the Great Hall of Spins that is triggered by landing three Bonus Hammer symbols on the reels.

Once all the features have been triggered, the players can pick the one they like the most when going back to the Great Hall of Spins feature.

The game can award the players with huge wins, and it’s one of the most popular slot game online today.